Deep sea fishing in the Oahu waters can yield a wide variety of game fish. From the large and powerful Blue Marlin to the Tuna, Mahi Mahi and Ono, which provide a great fight and a delicious after-fishing meal. Take a look at the photo gallery to see some of our catches.

The pacific blue marlin is the biggest predator that feeds in the waters off the Big Island. Hawaii has a decent number of Blue Marlin year round, however they tend to show up in big numbers during summer. The Blue Marlin is strictly a heavy tackle fish, targeted by either trolling or live baiting with tunas. Blue Marlin are known to exceed five hundred pounds in Hawaii’s productive waters, with a good sized fish coming in around 250 pounds. Blue marlin are not regarded are great eating fish, but when smoked it is a local favorite.

Striped Marlin are an integral part of our winter fishery. They migrate through our waters from December to April and range in size from 30 to 120 pounds. Striped Marlin are known to be very acrobatic and colorful. The often travel in packs and are known for multiple hook ups. 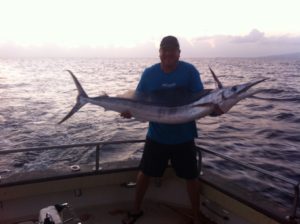 The smallest and rarest member of the billfish family shows up in big numbers around winter-springtime. They are more prevalent in Hawaiian waters than any other place in the world. The average spearfish comes in just around 40 pounds, with a good fish exceeding 60. What the spearfish lacks in size though, it makes up greatly for in taste. Widely regarded as one of the best tasting fish available here in the islands, the spearfish is great raw as sashimi, grilled or lightly fried. 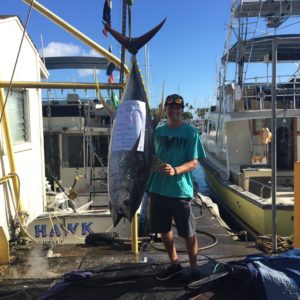 Ahi are most prevalent during the summer season and are viewed as one of the most prized catches in these waters. With fish known to exceed over 200 pounds, Ahi are a heavy tackle fish. Any Ahi under about 100 pounds is known as Shibi. Shibi are available year around. Ahi can be found year round, if you’re lucky, in dolphin pods off the Kona coast. Both fish are prime sources of raw sashimi or poke, but it can be grilled or pan fried.

A fishermen’s favorite, known for its acrobatic jumps and aggressive feeding. Mahi Mahi are found year round, but are most prevalent during the spring. The average is about 20 pounds, with bigger fish reaching upwards of 50pounds. Mahi Mahi is a light tasting fish that is better served baked, pan fried, or grilled with any number of seasonings.

The ono is one of the fastest fish in the ocean and has some of the fiercest teeth to go along with its impressive speed.
Ono average around 20 pounds but many exceed forty. Ono are often fished for in shallower water, along the deep water ledges and drop offs. Ono are available year around in numbers ranging from average to great. Ono is best served grilled lightly, for it cooks extremely fast.

A small torpedo-shaped tuna that is available year around in good numbers. It can reach upwards of 30 pounds. The bigger the Aku the better it is to be used raw as sashimi. Aku can be grilled or panfried, too. As a light tackle adversary, Aku are great for anglers of all levels, and are targeted with 20 pound stand up tackle.